The M1A1 carbines feature many of the same characteristics of the original Inland Carbines and are manufactured in the USA!

The M1A1 carbine is modeled after a late production 1944 M1A1 Paratrooper model with a folding “low wood” walnut stock, type two barrel band, and includes the same adjustable sights which were actually introduced in 1944.

The M1A1 includes a 15–round magazine and offers the same common features of the 1945 M1 model. Attention to detail has been carefully taken to produce a replica as close as possible to the original Inland production including cartouche marks and stampings in the wood specific features of the Inland Carbines.

In 1941, with the US being pulled into one of the greatest conflicts in world history, a division of General Motors was tasked to support the war effort.

The result was firearm history with Inland Manufacturing becoming one of the largest gun manufacturers in the US, producing nearly 3 million firearms in less than 5 years.

The most notable of Inland’s firearm production was the .30 Caliber M1 carbine and the folding stock variant, the M1A1 Paratrooper model. 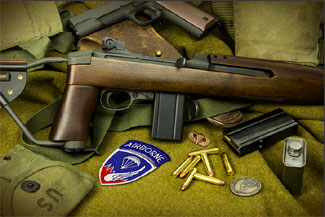